Jabir: I’m so sorry Nala, I have no idea how this happened.

Nala: What do you mean you have no idea how this happened?

Jabir: You know I was wearing one.

Nala: But then…how did this happen?

Jabir: Well, you aren’t the only one…

Nala: What’re we going to do?

Nala: Are we keeping it?

Nala: Say something else! What do you mean you don’t know?!

Jabir: Nala! I’m as distraught as you are. And mad at myself. And scared stiff! We’ve been through a lot of things. This is the worst piece of good news we’ve had in a long time!

Nala: Worst piece of good news. Ha! That’s one way to put it…

Jabir: We’re supposed to be over the moon right now.

Nala: It’s Amavasya Jabir…there is no moon to jump with joy over.

Nala: I don’t get it! As a woman, with such a loving and lovely family, I should be thrilled right now. I should be grateful for our privilege to conceive. To bring a life into this world. But…but…

Jabir: But you don’t. You don’t. And, neither do I. Gosh, I’m so sorry to have brought this upon us!

Nala: It’s not your fault alone, Jabir. We should’ve both been watchful. It’s just the irony. There are women out there who pray for miracles like these and we’re just sitting here feeling cursed.

Jabir: Nala, you know exactly why we’re reacting the way we are.

Nala: I do, I do and then, I don’t. I’ve been blessed with the opportunity to be a mother for the third time. How many are, Jabir? How can I possibly be sullen about it?!

Jabir: Bringing a child into this world is a superpower, yes. But we just do not have the means to raise another child right now. We’re getting by with Kadir and Kaia but you know as well as I do that…that

Nala: That some days are a struggle to make ends meet…isn’t that what you’re saying? I am trying really hard here for it not to be…

Jabir: I know you are, Nala. You don’t need to say it. I know how hard you’re driving yourself and the truck and then coming home to play mommy after all of it because that’s what children need – nurturing from both parents. That’s exactly the point. Do you think we have it inside of us, physically, mentally, emotionally, financially to bring another member into our family? Two kids; the four of us; we’re quite a handful already. The kids don’t see you enough. I don’t see you enough. We have a loan to pay off on the truck. Can you imagine how our needs will skyrocket with a baby coming onto the scene? And you’ll barely have any time for anything else! No Kadir and Kaia, no work, no me, nothing but the baby! For a while at least.

Nala: But the kids will love to have another sibling. Babies are like toys. You remember how excited Kadir was about Kaia!

Jabir: Nala! This is no game. This is life! It’s a lifestyle shift. You’re the only earning member of this family. We’re not financially equipped to have another child. Also, it’s downright unfair to your existing pair of children to be willing to shift all your time and focus onto the baby, which naturally you’ll have to do – neither of which you’ve been able to give them fairly in a while.

Nala: I’ve always tried to give you all the best I can.

Jabir: And you have. And we’re doing reasonably well. A third child though, will completely throw us off balance. If, God forbid, things don’t turn out the way we intend them to, do you want us to be wondering where our next meal’s going to come from? I don’t think we’re wired for that kind of uncertainty. It’s not fair to Kadir and Kaia. It won’t be fair to the one that we bring into this world. And above all, it’s not fair to you. You’re the one putting food on the table.

Nala: To you either, right? You’ll be manning the home front after I give birth and when I’m away, like you so far have. It is a lot more responsibility.

Jabir: Yes, to me either…

Nala: Are you saying that we should…?

Jabir: Yes…there’s no easy way to say this. But we should end this story before it begins.

Nala: Builds any further rather…

Nala: Ohh! Abortions change mothers forever Jabir…we’re not the same people. Damaged, broken, deeply regretful, guilty. Everything! All at once.

Jabir: It doesn’t have to be that way Nala. This is our choice. And what’s happened is not our choice!

Nala: I understand. But now it’s happened. And it is something we should learn to accept.

Nala: True as that may be, there’s so many more points in question – maternal, moral, legal…

Jabir: There really are no legal constraints. We’re perfectly eligible to abort the fetus.

Nala: Stop calling it that!

Jabir: What do I call it then?!

Jabir: I don’t get it Nala!

Nala: You won’t! Only a mother will. The difference between a child and a fetus. Life and merely a body.

Jabir: I’m sorry Nala. But you’re making this tougher for yourself. Tougher than it has to be. Our laws affirm the right to abort at this stage. And that’s exactly what we should do. This was not meant to be. And it’s best to end it.

Nala: The cost of an abortion…?

Jabir: Nothing. Nothing in comparison to pre-natal care, the delivery, post-partum care, rearing and raising a whole new person!

Nala: I meant the price of our peace. Losing our minds, knowing we’ve done something unethical. Defying every maternal and paternal instinct…

Nala: Okay! Okay! My head is just not in the right place for me to make a decision.

Jabir: Nala, you’re worried about the emotional repercussions. I am too. You find yourself curled up into a tricky knot sometimes. But there is a way to untangle.

Nala: I know there is. It’s just hard to think of it as clinically…

Jabir: Think of it practically then. We have financial constraints. Constraints that could well lead to a crunch. We’re emotionally accountable to Kadir and Kaia first, before anything or anyone else. This is unaffordable for us. That’s it.

Nala: That’s it? I just get the job done and we’re done for good? You know as well as I do that’s not true.

Jabir: We’re going to blame ourselves for a long time after. We’re going to be in this bad space for a while. But on the brighter side, if there even is one – the collateral beauty of it all is we won’t have to go through the trauma of another pregnancy; another birth, feeling dominated, exploited, humiliated, drained and criticized by another baby. You know it’s possible to hate your infant from the word go! It’ll make ours such a shout-y, crabby, glum home.

Nala: I see what you’re saying. I feel the same. But the guilt is getting the better of me.

Jabir: It will. And as crude as this may sound, I’ll take the guilt over the baby right now.

Nala: Yeah. Well, in that case, the homemaker must circumspectly avoid making any more of these.

Jabir: Yes. Got to play safe. Doubly safe. But first, let’s get this process underway?

Jabir: It’s okay, Nala. You don’t have to say it. It’s too soon and it is not your fault. 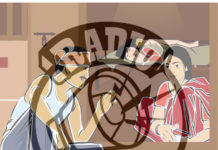 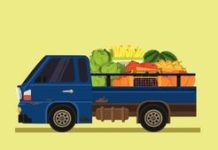 A home isn’t built in a day. Nala and Jabir’s wasn’t either. A piggy bank of hassle and hustle, planning and precaution, many pennies and fewer pounds and two little cubs named Kadir and Kaia, make up theirs.

Jabir is the stay-at-home husband. The domestic engineer.
Nala, the working wife. She sells fruit from a wayside stall in Bombay’s Central Business District.
And while her harvest may be seasonal, the necessity to work is not.
Together, they hold it all together.

They have bills to pay, children to raise, a home to tend to and daily pocket battles to contend with. It’s the quintessential story of the middle class.

When night falls and the kids are fast asleep, they often sit on the verandah to discuss the day – Was business bearing ‘fruit’? Were they sticking to the budget? Could they save a penny now to gain one later?
Perhaps even, revealing how secure they truly feel in a temperamental material world.

Homemaking is the ultimate career. All its vicissitudes find expression through Nala and Jabir’s dialogues in darkness.